“Matrika” is derived from the root word ‘Matr’ (मातृ) meaning ‘mother.’ She is believed to be the power which is the epitome of motherly virtues and also a protector, provider and nurturer of all the powers in this universe. Just like everything on earth derives its source energy from the Sun, all the energies of the universe acquire their power from the Matrika. Matrika plays a very important role in Tantra because of her innate ability to procreate exactly like herself. She can clone herself exactly and produce other powers and forms. She is everywhere and in everything in her subtle form but in her manifested form she is believed to be present in the universe, ruling the eight directions which also symbolize infinity.

Matrika was always present in her original form as Yogmaya.  She is the supreme power of this universe.  Shiva is the supreme God and within him resides Yogmaya. Because of Yogmaya, Shiva is considered to be Ishwara. The absence of the power of Yogmaya transforms Shiva into Shava or a corpse.

She existed within Shiva even before the creation. Shiva’s prime duty is to annihilate all earlier creations so that a new creation unfolds. But this destruction occurs at the right time, like Nature allowing a flower to bloom to its peak and then destroying it by withering it, creating the opportunity for new flowers to bloom.

For this to happen Lord Shiva needs power and energy that can nurture the universe to blossom like a flower, like a mother for a new creation. This energy is called “Matrika Punja” which multiplies itself to merge into every part of this universe. Thus Matrika became present everywhere in the creation. It is because of her that the universe self sustains and self-nurtures itself until the point of annihilation. After annihilation of a creation, a new creation takes place and the same Matrika then plays the role of sustainer and nurturer of the new universe.

The story of her origin

According to“Siddha Dharma” there are two most prevalent stories of the origin of Matrikas. Both these stories were revealed by Maharishi Vishwamitra.

There are eight Matrikas but they do not manifest together. The first three Matrikas are Kaumari, Vaishnavi and Brahmi. Subsequently, Shiva manifests as Tridev, the three God-heads Brahma, Vishnu and Shiva.

Kaumari manifests as Parvati, Vaishnavi as Lakshmi and Brahmi as Saraswati . Then these three Matrikas become the seven Mothers or Sapta Matrika. In dues course they transform to become eight or Ashta Matrika, then sixteen or Sodash Matrika and then to thirtytwo main Matrikas.

As per “Siddha Dharma”, it is said that after the first creation, the universe went into cycles of creation and annihilation. Shiva and Yogmaya descended to Mount Kailash in the Himalayas to impart the timeless wisdom of Agama-Nigama to the saints and sages. They would frequently engage in conversations with each other about tantra and those talks were heard by the saints and sages as well as siddhas and also Maharishi Vishwamitra. They then decoded these talks and went on to spread this knowledge to the masses.

Varaha Purana states that they are not seven but eight, the eighth being Yogeshwari who was created out of a flame from Shiva’s mouth. The eighth is sometimes said to be Narasinghi, the counterpart of Lord Narasimha.

According to Devi Mahatmyam, Durga created the Matrikas from herself. When demon Shumbha challenges Durga for a combat, with the help of Matrikas she slaughtered the demon army. After that she killed him and sucked the blood of demon Raktabija. Kali is given the epithet ‘Chamunda’ after she killed the demons named Chand and Munda. Kali is described as a Matrika. Devi Mahatmyam says that they are all her different forms and after the perpose is fullfills she absorbs the Matrikas in herself again.

In Matsya Purana, Shiva creates seven Matrikas to combat the demon Andhaka, who had the ability to duplicate from each drop of his blood that falls from him when he is wounded. The Matrikas drink up his blood and help Shiva defeat the demon. After the battle, the Matrikas begin a rampage of destruction by starting to devour other gods, demons and people of the world. Narasimha, Vishnu’s man-lion incarnation, creates a host of thirty-two benign goddesses who calm down the terrible, fire-breathing Matrikas. Narasimha commanded the Matrikas to protect the world, instead of destroying it and thus be worshipped by mankind.

Shiva is the spirit of knowledge. Andhaka represents ignorance or darkness. The more knowledge attacks ignorance, the more it tends to rise and increase. This is represented by the multiplication of Andhaka and secondary asuras. Unless the eight evil qualities, desire, anger, greed, arrogance, delusion, envy, slandering and malice (kama, krodh, lobha, mada, moha, matsarya, paisunya, and asuya) are completely brought under the control of knowledge and kept under restraint, it can never succeed in putting down Andhakara (darkness).

In Varaha Purana, they are created from the distracted mind of goddess Vaishnavi, who loses her concentration while performing certain austerities. The Sapta Matrikas are affiliated to Mother Shakti and Skanda, the warrior God. The Puranas also state that the Matrikas rule various substances of the body.

These Matrikas are considered to be the main goddesses of the above basic living elements of the body.

Matrkas’ concepts, appearances and nature change rapidly from period to period, from text to text and from tradition to tradition. There is no standardized universally recognizable form of the Matrkas.

Individually they are depicted as benevolent and graceful mother-like goddesses. But, in groups they appear as warriors; and their names and numbers also differ.

The Matrkas of the Puranas are invariably gruesome female warriors fighting the demons. The ferocious, blood-drinking Matrkas are not referred to as mothers; nor is there a reference to their ‘motherly-qualities’.

Kushana period had Balagraha deities called Matrkas, which were dangerous for children from the age of five up to the age of sixteen.

Mothers in Tantra and Shakti Panth:

Popular tantra and power cults during the Gupta period and medieval centuries believed in the coexistence of male and female theories. They made a new change in the already existing concept and reinstated the feminine form of the male deities as a female dominant power in the form of a goddess. In due course of time, the number, names and signs of the mothers were standardized.

This new creed began to portray Matrika as stunning, graceful, benevolent and caring mother goddesses, with babies in their laps and holding weapons in their hands. These statues of the Matrikas were a beautiful harmony of mythological symbols and expressions, which have been practiced till date.

In India, single and joint statues of Saptmatrikas are found mainly in three forms –

According to the description in the Puranas, the mother has four arms and a baby in her lap. Some statues have their vehicle and flag inscribed, while in some places their vehicle is marked as their pedestal. Generally, the following standards have been established for the images or pictures of the matrikas:

Nowadays, the matrikas are carved on the walls of the temple or in a small niche in a row. The faces of all of them are made the same. They are well equipped with crowns, jewels and carry weapons and emblems like their male deities. They are identified only by their weapons and emblems and their names are inscribed below. According to Vishnudharmottara and the book Rupmandan written by Sutradharmandan, describe that Saptamatraka should have a statue of Veerabhadra at the beginning and Ganesh at the end.

The Matrkas, however, lost much of their significance and position in the popular religious practices during the middle centuries. But, they continued to appear in temple panels and niches. Today, they linger on the fringes of the Hindu pantheon. 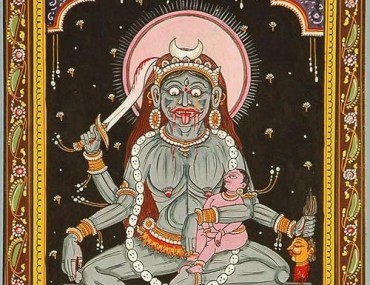