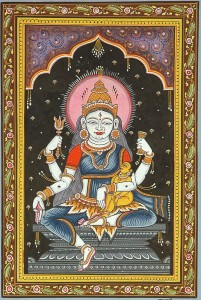 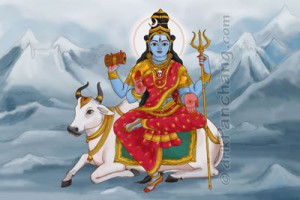 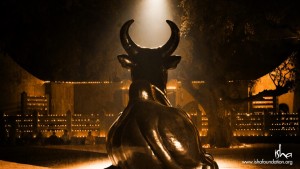 Maheshwari is the power of God Shiva who is also known as Maheshwara. She has many names; Raudri, Rudrani and Maheshi, all of them derived from Shiva’s names Rudra and Mahesh. Her complexion is white and she has three eyes. Her mount is Nandi the bull. She is adorned with serpent bracelets, a crescent moon and the Jata-mukuta.

When she is depicted with six hands:

In Vishnu dharmottara Purana, Goddess Maheshwari has five faces, each possessing three eyes and each adorned with Jata-mukuta crown, a crescent moon on each of them. In four of the hands she carries the thread, a damru, a prong and a bell, the two remaining hands being respectively for blessing with fearlessness and desire fulfilment.

The Gayatri Mantra mentions ‘vrishabha’ which has many different symbolisms. A few are mentioned here :

The word Vrishabha or Vrushabha, has two meaning. A simple meaning is the bull, the vehicle of Lord Shiva. But there is another hidden symbolism in it.

According to Swamini Saradapriyananda Vrishabha is also symbolically related to Lord Shiva’s role of a destroyer. Only a realized soul can understand the significance of death. Death is the beginning of regeneration and it is only a miniscule part in the great cycle of birth and death. The Vrishabha indicates how one can get liberated.

Nirkuta derives another meaning for Vrishabha: ‘Atribrihati reta iti’meaning, “roots out of the seed”. When a seeker serves the Lord faithfully, just as an ordinary bull serves his master day in and day out, without demanding or seeking anything for himself, then this very attitude destroys the seed of karma and he will not be born again.

The Vrishabha attitude is the carrier of the most auspicious of all, the release from the bondage of life.

Vedas describes that ‘Vrishabha’ is symbolic as the father of abundance. It is he who fertilizes the forces of Consciousness, Nature, the cow and produces or bears in his stream of abundance the worlds. Bull is the Purusha, the conscious being and cow is the Prakriti, the power of consciousness.

Sadguru says: Nandi is a symbolism of eternal waiting, because waiting is considered the greatest virtue in Indian culture. One who knows how to simply sit and wait is naturally meditative. He is not expecting Shiva to come out tomorrow. He will wait forever.

Nandi is Shiva’s closest accomplice because he is the essence of receptivity. Before you go into a temple, you must have the quality of Nandi – to simply sit. You are not trying to go to heaven, you are not trying to get this or that – you go inside and simply sit. So, just by sitting here, he is telling you, “When you go in, don’t do your fanciful things. Don’t ask for this or that. Just go and sit like me.” That’s his message for you. Simply go inside and sit, alert, not sleepy.

If you just wait without doing your own thing, existence will do its thing. Meditation essentially means the individual is not doing his own thing. He is just there. Once you are simply there, you become aware of the larger dimension of existence, which is always in action. You become aware that you are a part of it. Even now, you are a part of it. But becoming aware that “I am a part of it” is meditativeness. Nandi is the symbolism of that. He reminds everyone, “You must sit like me.”