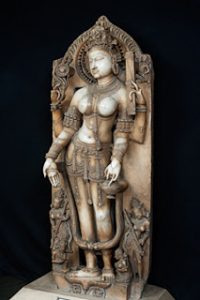 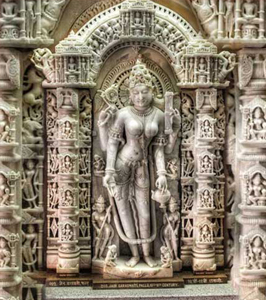 Hanumangarh district of Rajasthan state has a significant archaeological importance. This is that district where excavations revealed that it was the centre of the most ancient River Valley Civilization, which glorifies a thousand  year old rich culture. There are more than a 100 Thehads in this district where the remains of the ancient culture lie buried. The sculptures, coins and other objects found here reveal that this area has been influenced by the cultural and economic and social upheaval of the culture of different periods of time.

The remains found from excavations at Kalibanga reveal that there existed an ancient civilization older than the Nile, Volga and Indus Valley Civilizations. The excavation reveals the Ashtamunikar skeleton, epigraphic articles, coins, seals, mud pots, precious ornaments, beads, statues, toys, wells, bathrooms, fortresses, well-maintained lanes, village squares and drains and many more such things that have been described in Mahabharat.

The Harappan Civilization is about 5,000 years old. The objects found in the excavations of Kalibanga and Rakhigarhi clearly prove that three thousand years before the birth of Christ, India was a prosperous, developed country and along with cosmetic items, many other objects too were exported.

Some of the items found during the excavation are listed below:

In Kalibanga, Pre-Harappan time dinner plates, bowls, cup-style glasses with thin bottoms, small pots, teaspoons and terracotta or earthen storage utensils have also been found. Some articles were plain but some were artistically painted. They can all be classified according to their sizes, paintings and the places where they were found; such as objects to be used in households, in religious matters, meditative objects or objects used for burial. Following are the main characteristics of the utensils of the pre-Harappa period:

Items made of stone:

Many stone items have been found in these excavations.

Terracotta or clay toys and figures:

A number of clay items, strengthened and hardened in fire, are found in Kalibanga.

The European view is that wheels with spokes were not used in India. But it would be incorrect to assume that the Harappans did not use such wheels. Our country’s hot and humid climate destroys all organic matter in the course of time. In such a situation it would be too much to expect to find the remains of wooden wheels. On terracotta specimen found in the excavations at Kalibanga and Rakhigarhi, the wheel is characterized by painted lines radiating from the centre to the periphery, while in other findings their protrusion is reduced. This is a technique that is being followed from centuries. These specimen clearly prove that the people of Kalibanga were fully familiar with the spoked wheel.

During the excavation, numerous weight measures have been found.

During the excavation at Kalibanga, many ornaments made with semi-precious stones have been found.

Several types of bangles have been found here, indicating that the town may have been known for terracotta bangles. Looking at all of this, one can conclude that the people of this place must have had an artistic attitude and they must have been exporting cosmetics and beauty products.

Many seals and coins of this period have been found. Notable among these are cylindrical seals with figures that denote the following:

The Thehads of Rang Mahal

This place was famous for the production of ceramic items which are called Rang Mahal ware culture. These distinct earthen pots are made on a potter’s wheel and are either red or pink in colour. These utensils include jars and pots with raised edges are either circular or oval in shape. The edges of many pots are wavy. The neck of some pots and vases have been polished with black-red colour and then decorated with pictures. The other types of items include spouted utensils, cooking utensils, storage jars, a variety of bowls, lamps, incense-stands, etc. Some carved pots have markings of cloth. Significant in moulded mud vessels are bowls and miniature basins. Cultural assemblages include statues, terracotta animal figurines, carts, wheels, weight measures, balls, meat-weft-stones, dice, potters’ seals, hoe, ear-jewels and beads of coral, lapis and shell, money banks, rotating mills, pestles and also bone and iron articles.

The Thehads of Pallu Village

In the centre of village Pallu in Hanumangarh district is an ancient thehad. In 1917, a Rajasthani philanthropist and archaeologist, Dr. Louis Tassitori of Italy excavated the old thehad of Pallu and found numerous small and big Vastu and sculptural statues. Significant among the find from the Pallu thehad were two 11th century Jain Saraswati statues which are examples of the exquisite craftsmanship of that era. Because of this uniqueness the Postal Department has issued stamps twice with these figures. Today, one of the statues is adding glory to the National Museum of New Delhi, while the other is on display in the Bikaner Museum. With the findings of these two statues it may be estimated that in the 11th Century the residents of Pallu were following Jainism.

An extremely rare presentation, with a height of 1.48 meters, this  four-armed, divine image of Goddess Saraswati is highly sophisticated and delicately carved in white marble, but its celestial whiteness has become yellow with time. The Jain Period followed a symbolic tradition in their imagery where it was a must to place images of Tirthankaras on top of the heads of the ‘Prabha’ of minor  deities. This four-armed Saraswati stands in an attractive, triangular pose on a fully bloomed lotus flower. In her hands she holds a lotus, tied with a string to left hand is a palm leaf manual,  the lower right hand holds a rosary of beads and an oblong water pot and is in the pose of showering grace. The idol wears a transparent garment. It is adorned with a wide range of ornaments that are commonly found in contemporary paintings, especially the jewels on the arms, the delicate strings on the back of the palms, the jewels defining the roundness of the breasts and the long pointed fingers with sharp nails. It is an extraordinary, extremely attractive, delicately moulded figure.

Near her feet are figures of two female attendants who play small instruments like the Veena and the Ekatara, a donor couple or maybe a king and a queen or a wealthy businessman and his wife.  Apart from this, a damaged image of a celestial Veena can also be seen around the feet of the statue. Looking at its symbolic distinction, it can be asserted with certainty that this statue of the Goddess of Speech is a representation of the Jain period. It is considered a masterpiece of the Chauhan period. Being one-of-its-kind, this rare piece of art is a pride of The National Museum, New Delhi.

A Jain Saraswati Vagdevi, made of white marble, housed in the Bikaner Museum is another statue acquired from the excavations in Pallu village. The main statue bears a close resemblance to the one in the museum of New Delhi. But on the right and left sides, there are female attendants on whom are etched miniature figures, one on each attendant. The statue is adorned on both sides with carved pillars and archways. On the top-most part of the archway are three tiers similar to those found in temples. This statue is very beautiful. Both these Jain Saraswati statues are exquisite creations of the middle period of Rajasthan. The remains of many idols have been discovered here, but both these figures are specimens of excellent craftsmanship.

From an archaeological point of view, Thehads are a heritage, which, if excavated, can reveal a lot of ancient information.  If the items found here are mined and carbon tested to know which age they are from, then they will reveal their exact period and also the rise and fall of this ancient civilization.