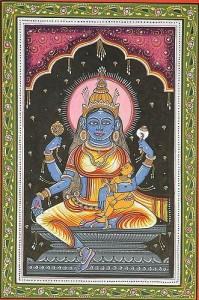 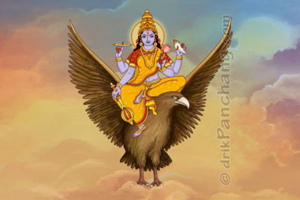 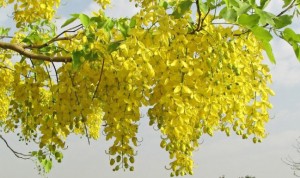 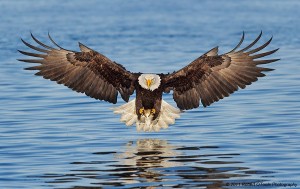 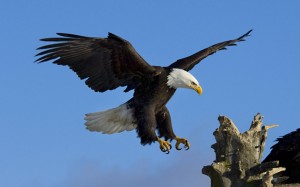 Vaishnavi is the power of the Preserver-God Vishnu. She has dark in complexion, beautiful with full breasts, pretty eyes and a lovely face. She wears a yellow garment, a wild flower garland and is heavily adorned with many ornaments just like Vishnu. Vaishnavi wears a cylindrical crown called Kiriṭa Mukuṭa.

Like Vishnu, she holds a conch, a disc, a mace and a lotus. One hand is in blessing posture, the other bestows fearlessness. She sits under under a Raja Vriksha. Her mount is Garuda.

Devi Purana says that her upper hands hold a disc and a conch and her lower hands grant boons and fearlessness.

When she depicted as six hands:

Symbolism of the Raj Varksa:

Raj Varksa refers to a kind of tree commonly found in the forests of ancient India. It is a species of the pea/bean family of flowering plants. In English it is called the Indian laburnum or the Golden shower tree. It is a deciduous tree growing up to 15m high and has bright yellow flowers in long racemes. It grows all over India and it is the state flower of Kerala. It is also popular as an ornamental plant. Its leaves are used to supplement the diets of cattle, sheep and goats fed with low-quality forages.

Ayurvedic literature, such as the Charaka-saṃhitā and the Suśruta-saṃhitā mention this tree for its medicinal properties. It is also known as ‘aragvadha’, meaning “disease killer” and “sarvaroga prashamani” or “one that cures all types of diseases and shields the body against numerous microbial infections.”

The fruit pulp is considered a purgative, therefore, self medication of without medical supervision is strongly prohibited.

Garuda is the king of birds and described as a divine eagle-like sun bird, a kite-like figure. He is shown as a giant bird with partially open wings. Sometimes he is depicted as a man with wings and some bird-like features. Garuda is considered a protector with the power to swiftly go anywhere, ever watchful and an enemy of the serpent.

Garuda ‘devours’ all evil on earth. He is the one who brought ‘amrita’ or ’the nectar of life’ from heaven to earth.

Lord Vishnu fights injustice and destroys evil in his various avataras to preserve dharma. Garuda is His mount. His eagle-like form is shown either alone or with Vishnu, signifying divine approval of the power of his state. Garuda is a part of state insignia in India, Myanmar, Thailand, Cambodia and Indonesia. The national emblem of Indonesia is called Garuda Panchashila.

The great epic the Mahabharata tells the story of Garuda’s birth. When Garuda hatched from his egg, he appeared as a giant inferno, the same size as the great deluge which is said to destroy the world at the end of every age. This scared the gods, who pleaded with Garuda for mercy. Upon hearing how frightened the gods were, Garuda reduced his size and energy.

Garuda’s ‘eagle eye’ is symbolic of the ability to see clearly through ignorance and misconceptions, and look straight into the truth of each situation.

“Our deepest fear is that we are powerful beyond measure. It is our light, not our darkness that most frightens us”.

Our minds in particular are incredibly powerful; our mood, stress levels, rates of anxiety and sadness all have a huge impact

on our nervous and immune systems, as does happiness, joy, hope and confidence. Too often do we diminish our own power or misuse it. The problem lies not in the power of the mind, but how we use it. Despite what we might think, the mind is not a bad thing, it just gets caught up in the ways of the world sometimes; it gets scared and protective, and when we let it run amok, that is when it becomes a problem.

Just as Garuda used his great power to ‘devour’ evil, to transport Vishnu – the preserver of life – and help humanity move from darkness to light, we too can practice using our own power for good over evil, to help ourselves rather than cause harm.

This yoga postures – may look simple or nothing more than a physical shape but in fact there is a whole lot of energy, power and meaning within it. When practicing the posture Garudasana uses breathing as a tool to expel ignorance, mind-chatter and ego.