Philately is one of the world’s most popular hobbies. The Indian Postal Department issues postal stamps on India’s cultural heritage, history, geography, animal husbandry, flora, legends, national heroes and other diverse subjects from time to time. The issuance of stamps by the postal department is considered prestigious and this prestige came to Pallu village in Hanumangarh district. The statue of Mother Saraswati, found in the village of Pallu in the excavations of 1917, belongs to the 12th century Chauhan period. The Postal Department’s issuance of stamps of this Saraswati statue twice indicates how rare this artwork is. Today it is housed in the National Museum of New Delhi.

The first World Hindi Conference was held in Nagpur, Maharashtra from 10th to 12th January, 1975. This conference, based on the concept of Vasudhaiva Kutumbakam, was inaugurated by the former Prime Minister of India, Late Mrs. Indira Gandhi. On this occasion, 30 lakh postal stamps with the idol of Goddess Saraswati, each with a value of 25 paise, were issued.

Along with the postal stamp, a brochure related to it, was also issued. In this brochure, which was issued on 10th January 1975, it is written thus:

On 12th April 1975, the World Telugu Conference was held in Hyderabad. On that occasion also, 30 lakh postage stamps of this statue of Goddess Saraswati, at the value of 25 paisa per stamp, were issued. Thus, 60 lakh such postal stamps have been issued so far. 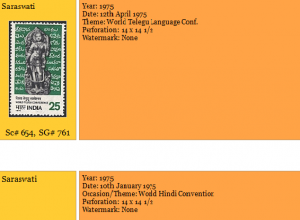 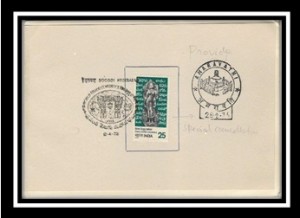 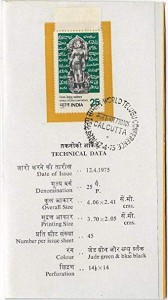 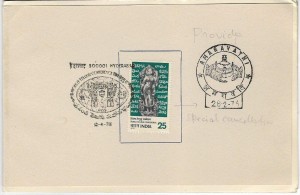