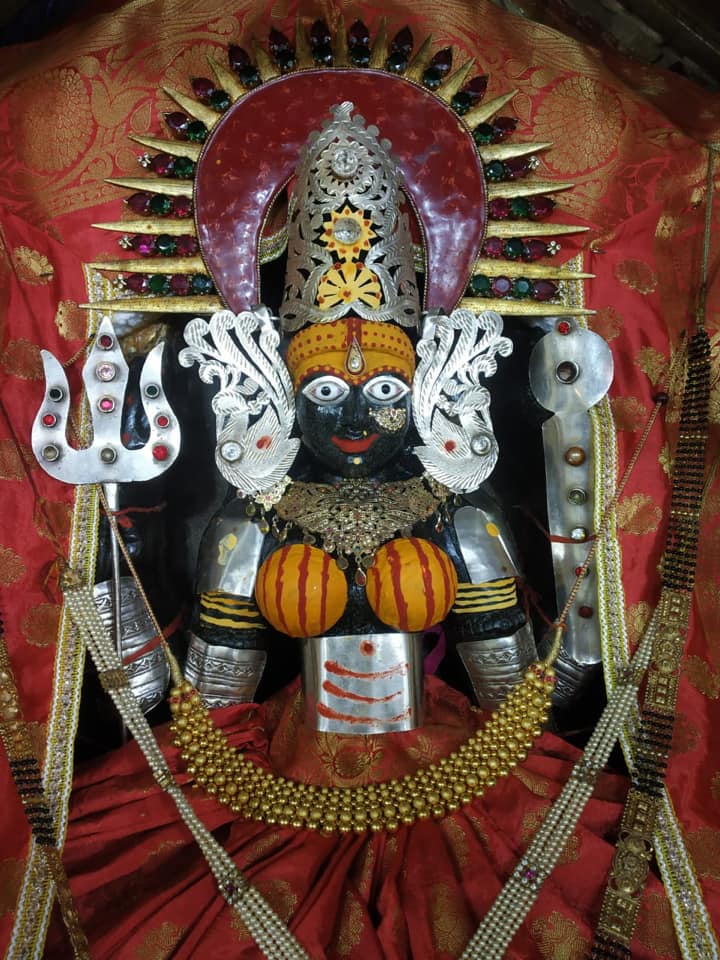 The History of the temple of Mother Goddess Brahmani

Goddess Brahmani Temple, situated in the village named Merta Road (Phalodi) in Nagaur district, is an ancient 11th-century temple. The Goddess there is known as Falvardhika Devi and holds a special place in the hearts of her devotees. When King Nahar Rao Parihar founded the Brahma Temple in the kingdom of Pushkar, he also constructed 900 ponds, stepwells and numerous small temples in Marwar. At that time, a temporary abode (temple) for Mother Brahmani was already present in the village of Faludi. The king converted it into a permanent structure. Near this temple he also constructed a pond and a stepwell which are present even today.

In 1013, Raja Nahar Rao summoned Lankesarji, the son of Bhojakar Keshavdasji  of  Ratnavali (Run) for the consecration of this temple of Goddess Brahmani. Then the king donated 18 acres of land for the running of the temple and put Lankesarji in charge of it. At the time of the temple consecration, he also built an archway outside the temple as a memorial, This archway, which looked like an enormous pillar divided into 9 steps, was a remarkable specimen of our ancient culture and artistry. Its height was 85 feet at that time, but later this archway was used as a great pillar for lighting lamps. During the festival of Navaratri, a divine lamp of the Mother Goddess would be placed on the topmost part of this archway pillar and the kings and monarchs of the neighbouring kingdoms would stand on the roofs  of their forts and catch a view it from there.

One year after the temple was established, in 1014, Bhojak Keshavdasji, Kirtoji, Baldevji, Sumerji etc. together formed a village and named it Phalodi after the Kuldevi Phalvardhika or Phaladayini. This place is now called Merta Road.

In 1351 AD, this temple was very popular and financially very stable. During the featival of Navratri festival, many kings and monarchs used to send gold and gem-studded garments to adorn the Goddess. Because of this extensive wealth had been collected here. This is the reason the Mughal ruler Alauddin Khilji invaded this land and successfully looted away many gem-studded clothes and jewellery from this temple. It was in this attack that three sons of the priest, Shri Dhanji Jangla’s named Banaraj ji, Vishnu ji and Dopa ji were martyred while fighting against him.

In 1633 AD, when the Emperor of Delhi, Akbar’s army was going to invade Gujarat, it passed through Phalodi (Merta Road). The commander of this army was Kale Khan, whose eyes were fell on the 85 feet high glorious archway near the temple. Kale Khan first gave orders to destroy it. He himself entered the temple and started demolishing the four major artistic pillars on which the temple was standing. When three pillars had been destroyed, he entered the sanctum sanctorum with the intention of breaking the idol of Goddess. It was then that a miracle occurred.

A furious Brahmani Mata appeared in front of him and froze his feet into the ground on which he was standing. Kale Khan used all his strength but could not free his feet from the ground. Finally he gave up and prostrated at the feet of the Goddess asking for forgiveness and praying to be freed. The Mother Goddess forgave him and asked him to stop his soldiers from further massacre and looting. Kale Khan then ordered the looting to be stopped, but by then only a part of the archway was left and only one pillar inside the temple remained, which are still standing today. Kale Khan promised that henceforth no Mughal ruler would loot that temple. In 1947, when the railway line was laid through Merta Road, the Railways deposited lakhs of rupees as compensation in the name of the temple in lieu of that land.

Significance of the festival of Navratri

Navaratri has a special significance in all the Goddess temples across the country. But the temple of Goddess Phalodi Brahmani, located in Merta Road of Nagaur district has a very special significance, because the Navratri festival starts with the establishment of the kalash on the New Moon days in the months of March and September. During the second Navratri festival, a wondrous and miraculous practice prevails here, which is known as ‘Dua’ in the local language. In the whole country only here can you find this ritual being practised. The Navratri festival, which happens twice a year, starts on the New Moon day in March and continues till the seventh day. In the month of September too, it begins on the New Moon day and ends on the seventh day. From the first day of the New Moon till the sixth day, no offering are made to the Goddess. Only on the seventh day is an offering made to her.

During the festival of Navaratri, those devotees who wish to worship and invoke the Cosmic Mother alone are able to enter the sanctum sanctorum but with the invisible permission of the Goddess. Once they have entered the sanctum sanctorum, they are not allowed to leave for their homes. They have to stay in the temple for seven days, with no food, milk or fruits etc., They are only allowed to take the water of Charanamrit for the seven days. The devotee here may be an 8 years old  child or s 60 years old man. During Navaratri there are 4 aartis performed – one at 4 am, one at 10 pm, the third at 7 pm and the last one at 10 pm.  The entry of women into the temple is restricted only up to the point where the drums are kept in the temple.

On the fifth day of Navaratri, in the arati performed at 10 pm, the Goddess enters one of her devotees and he calls out the name of a person who belongs to the Shakadvapati Brahmin community. Now this person has a honour of bringing the first offering on the seventh day. The devotees of Goddess Brahmani who have been fasting and sustaining only on Charanamrit (water) for the previous 7 days, now go to that same person’s home and receive the offerings, thus completing their austerity. It matters not whether the chosen one is rich or poor, he is obligated to serve the Mother and her devotees. In this manner, the process of this “Dua” tradition is performed. Devotees from all corners of India come here and get their wishes fulfilled in the court of the Mother. 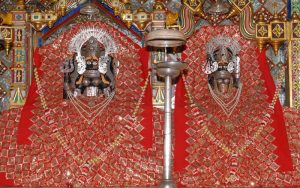 In the temple we see two idols of Brahmani Mataji. One of them is an ancient, main idol which was  slightly chipped. Years ago, a devotee made an exact replica of this idol and keeping the original idol in the sanctum sanctorum, installed the new idol there. But the Mother Goddess was not happy with this and therefore appeared in the dream of one of her  female devotees, a resident of Nimbahera, Mrs. Shanti Devi, the wife  of late Shankarlal ji Ojha  and instructed her to visit Merta Road. Obeying her order, she visited the temple accompanied by her sons on the seventh day of month of March in 1981. As soon as Shanti Devi reached the temple premises, The Goddess spoke through her, ordering that her idol  be removed immediately from the sanctum sanctorum and re-installed in the earlier place in the temple. Seeing the furious form of the Mother, the temple priest was summoned at once and the main idol was re-established in the earlier place near the newly installed idol. Only after this did Mother Brahmani calm down. 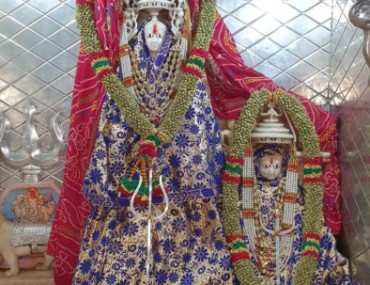 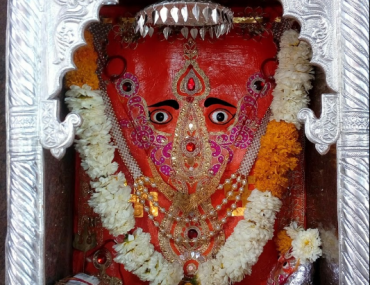