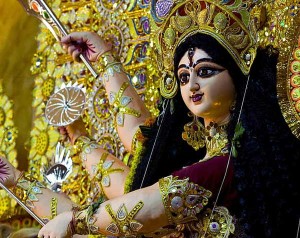 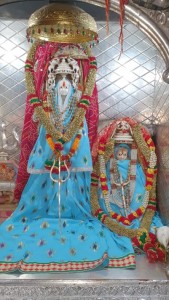 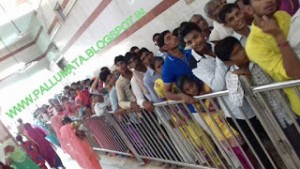 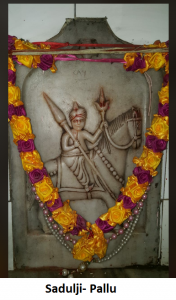 Pallu, a town in Hanumangarh district of Rajasthan state, has historical significance. Its geographical location is as important as Barmer,

Jaisalmer and Churu. The Thar Desert surrounds Pallu and there are no mountains nearby. The village had a lime fort before the middle Ages. It was constructed in three phases. It is built on the threshold of the old fort. The town has temples of Mata Brahmani, Saraswati and Mahakali and the Mother has far-reaching following from far and wide. There is a constant flow of devotees throughout the year. The sculptures installed in the temple clearly reflect the Jain civilization.

It is said that thousands of years ago, Bhojraj Singh of Gigasar (Bikaner) came here searching for his horse. As it was dark he stayed under a tree resting in that place and  Brahmani Devi made an appearance in his dream and instructed him to worship her . When Bhojraj Singh woke up in the morning, the idols of Maa Brahmani, Saraswati and Kali appeared out of the ground. And after this miracle her following and worship started. Soon after the temple was built and as time passed her following spread far and wide.

At present there are two temples in The Temple complex. Shri Brahmani temple was constructed by Saraswa Bhadus of village Singrasar and Shri Ma Kali Temple by Kabaa Bhadus. Both of them are the family deity of both clans. Both temples have silver doors, which were built several year ago. But even today they look like new. The temple has been worshiped by generations of Bhojraj Singh descendants. A public trust of the temple remains.

The daily offerings are distributed among the family of the five brothers of the priests, Bhagu Singh, Gulab Singh, Amar Singh, Uday Singh and Riednal Singh and they have 20-35 houses in the village. They are all descendants of Bhojraj Singh.

Mela and Pad-Yatra of Maa Brahmani

Pallu town of Hanumangarh district of Rajasthan state is famous all over India for the temple of Mata Brahmini. Twice a year a huge Mela or fair is held here during Navratri’s last two days – Saptami or 7th and Ashtami or 8th day as they are considered the most auspicious days of Navratri.

According to estimates, the number of bhagats or devotees who visit Pallu on Saptami and Ashtami varies between fifty thousand to two hundred thousand. Devotees come from all over the country to the court of Mata Brahmani by walking, rolling on the ground  and lifting the mark or Nishan on their shoulder, to honour the fulfillment of their wishes or maanta.

During this festival season devotees pray in hordes and visit different temples by foot and some come to Pallu and others visit Salasarji and the highway interconnects both these temples.  Arjanasar is west of Pallu, Hanumangarh  North and Salasar is south. The devotees cross each other on the highway  and  some are chanting Salasar Baba’s Jai on one side and some chant Jai Mata Di’s. All this creates a highly devotional ambience and gives it all a very special significance.

The temple of Shri Sadulaji was built before the temple of Brahmi Mataji. He is the gate keeper of Brahmi mataji. The idol of Shri Sadulaji has made in white marble. According to religious beliefs, Mata Brahmani gave Shri Sadulajis a blessing and honoured  him with a superior position and hence all devotees first should visit Sadulajis temple and then proceed to the Brahmani Mandir for darshan. Sadulji has become a true gatekeeper of mataji as all devotees have to offer prasad to him first as per the tradition.